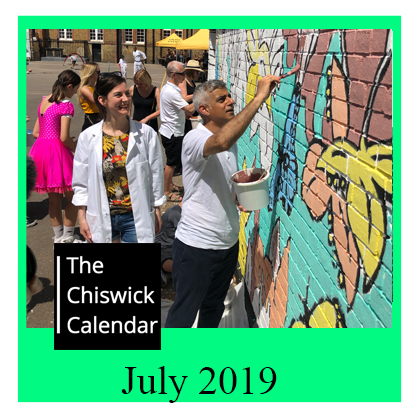 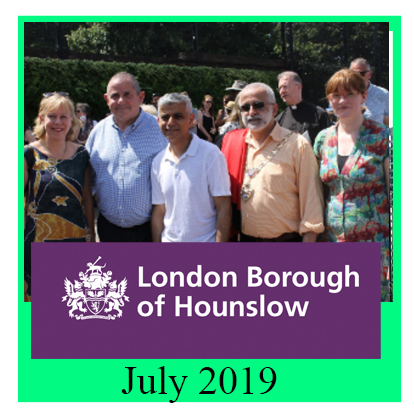 On 29th June 2019, London – The Mayor of London, Sadiq Khan unveiled a 400 feet  ‘green wall’ as well as other measures part of the Chiswick Oasis project aimed at tackling air pollution at St Mary’s school.

The project which has raised around £100,000 and gained the support of celebrities like Emma Thompson, David Dimbleby, Jeremy Paxman, has been featured all over the news in the past few months (including recently on the front page of The Times).

The event last Saturday was attended by hundreds of people: parents, local residents, as well as the Mayor of Hounslow, the Leader of the Council, local MP Ruth Cadbury and local councillors (We spotted John Todd and Ron Mushiso).

Despite the temperature well above 30 degrees, the atmosphere was one of celebration, with performances from children and adults, bands playing, games, food and drinks of all kinds.

Sadiq Khan mixed with the crowd for more than 2 hours as he learnt about the several achievements by the “Oasis” project. 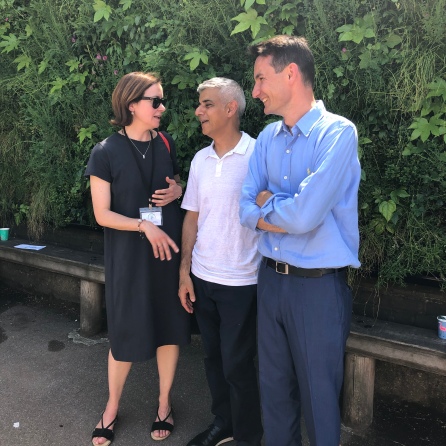 He then officially opened the 126 meter wall – the largest ever installed at a school in the UK – which is made up of 12,000 plants. This will help block harmful pollutants from reaching children as they play.

ANS Global, the company behind the green wall, not only slashed its fees for the installation, but has committed to maintaining it for free for the next five years.

It is providing training to teachers and parents at the school in order to explain in more detail how the living wall works. 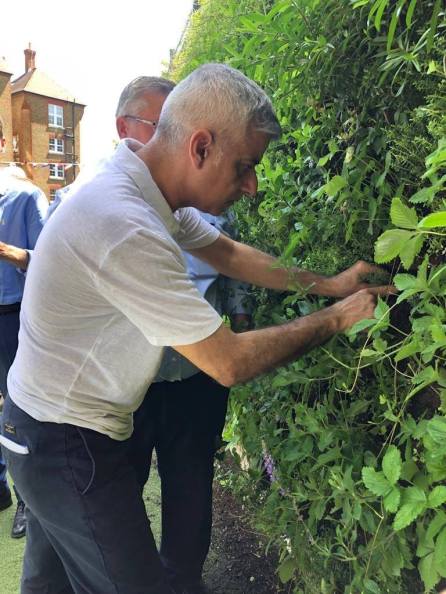 The living wall is splendid and has transformed the playground into a lush urban oasis which will eventually be open to members of the public, as well as playing host to future community events,  farmer markets, fairs, etc.

Steve McIntyre, the Urban Environment Consultant who has been leading the construction of the green wall, also supported by ARUP who advised on this for free, explained to the Mayor on his visit: “It is fantastic to be involved in the St Mary’s Chiswick Oasis project, which address the issue of improving air quality in urban environments.

“Research has shown that just green infrastructure can filter out up to 95% of the pollution created by vehicles, which demonstrates the true power of plants. We hope that Chiswick Oasis is the catalyst for more schools to learn about living walls, which have the potential to make a positive impact on people’s lives and health.”.

The Mayor could added two plants himself to the wall, both marked with his own name on wooden sticks: “I’ll have a red one” he asked winking. Andrea was quick to reply “We don’t do politics here, I think you should have a blue one as well”.  The Mayor conceded “OK then”.

Next September the school will receive an extra injection of cash from Tree for Cities, which will add more green features to the playground, as well as a vegetable garden.

And the Chiswick Oasis Project doesn’t stop here. Andrea Carnevali has been pushing on all front to turn the school from one of the most polluted, to one of the greenest in London

He introduced ‘car free Fridays’ for parents and staff each week and then convinced local businesses to take part in monthly raffle draws and donate vouchers, free meals, massages and so on to the parents who’d chose to go to school by any means but a car.

“I was overwhelmed with the level of support we’ve received” says Carnevali “It’s been amazing to see so many people and organisations in Chiswick and beyond rally behind this. Clearly people are now seeing this as a real problem and they are willing to help as much as they can.

The Mayor was then shown a brand new air purifying unit from iQAir, which has been installed inside the Reception class, the closest to the road but also the one with some of the youngest children whose lungs are most at risks.

The unit was funded by the Hounslow Council, keen to monitor its effectiveness on the reduction of particular matters. If the results are positive, they will look into way to help match-funding other units to place in the other classrooms too.

The Mayor was then taken to two rooms inside the school which have just been recently decorated using an “Air Purifying Paint” from a company called Airlite.

A colourful mural was also being painted outside the school to showcase the new product.

As the Mayor had a go at painting some of the motifs, Andrea Carnevali confessed to him “I didn’t quite believe it myself, but Airlite donated the paint for free and they seemed very keen. I thought to myself “Why not? We have nothing to lose: if it works, great! If it doesn’t…. well, we’ve got ourselves a newly decorated room. It’s a win win”.

The school then monitored the air for a few weeks, with the to get an idea of what the levels were like. The air monitor unit was also donated to us for free from another company, uHoo, keen to be part of this initiative (the beauty of such unit is that you can monitor the levels live, online anytime and it’s really user friendly).

Once the paint job was done (with the help of volunteers and local councillors too) the improvements were apparent straight away .

“I could not believe what I was seeing” – said Mr Carnevali, astonished, as he showed the Mayor live readings on an app on his phone. “The current levels of NOx are around 0.5 at the moment”. He then switch to data from the previous month, before the paint was applied: “look, 45 -and here it even peaks at 76. There has been a drop of NOx by about 90% .”

“It’s early days, as we’ve only being monitoring this for a few weeks, but the data seems to speak for itself. And if it carries on like this, we are certainly going to paint the whole school. In fact, I’m going to get some and paint my house too!”

The tour around the “Clean Air” initiative ended with the unveiling a plaque with hundreds of names of supporters of the Chiswick Oasis, the Mayor said to be “delighted to officially open the ‘Chiswick Oasis’ for the community who have done so much to bring this project to life.”

“Our toxic air is a public health crisis that increases the risk of dementia and asthma and damages the lung development of our children. I’m doing all I can to tackle it but I can’t succeed without the support of my fellow Londoners.

“I want to pay tribute to Andrea Carnevali, the school, the teachers, the governors, the PTA,  the private businesses, the Council and the MPs all working together to find innovative solutions to local problems and exactly the sort of project OUR Crowdfund London initiative was set up to support.”

Sadiq before leaving recorded these two special messages, the second of which directly to Andrea Carnevali.

Andrea said in his speech “If a few months ago, anyone had told I’d be hugging Sadiq Khan in front of a 400 feet green wall, featuring 12,000 plants I would have said ‘Whaaaat?!’ “

View all posts by Chiswick Oasis